1 Be particular about the rice

The first step in producing sake is rice farming.
Our Kurodo workers cultivate rice paddy fields to produce suitable rice (Hyogo Kitanishiki) for making sake.
Standards define that rice suitable for sake making has a large grain of 25g per 1000 grains.
This rice contains less protein and fat.
When our own rice production is not sufficient to meet demand, we source other first grade grains which have passed strict inspections.
Being particular about each rice grain is the key to making great sake. 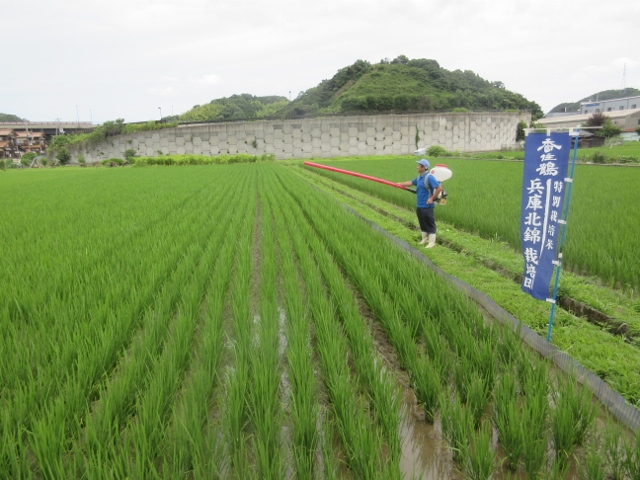 The brown rice is milled away to remove the bran, embryo and albumen.
Seimai-buai measures the amount of rice remaining after polishing.
Proteins and fats are in the outer layers of the rice grains.
They influence the quality of the sake and are removed slowly and carefully so as to avoid crushing the rice grains during polishing.
This gives sake a more delicate taste.
On the other hand, a high value of Seimai-buai makes it difficult to bring out the rice brand’s unique characteristics and requires additional processing in later stages of sake brewing.
Milling also removes minerals and vitamins that promote fermentation, requiring higher technologies at later stages in the production process. 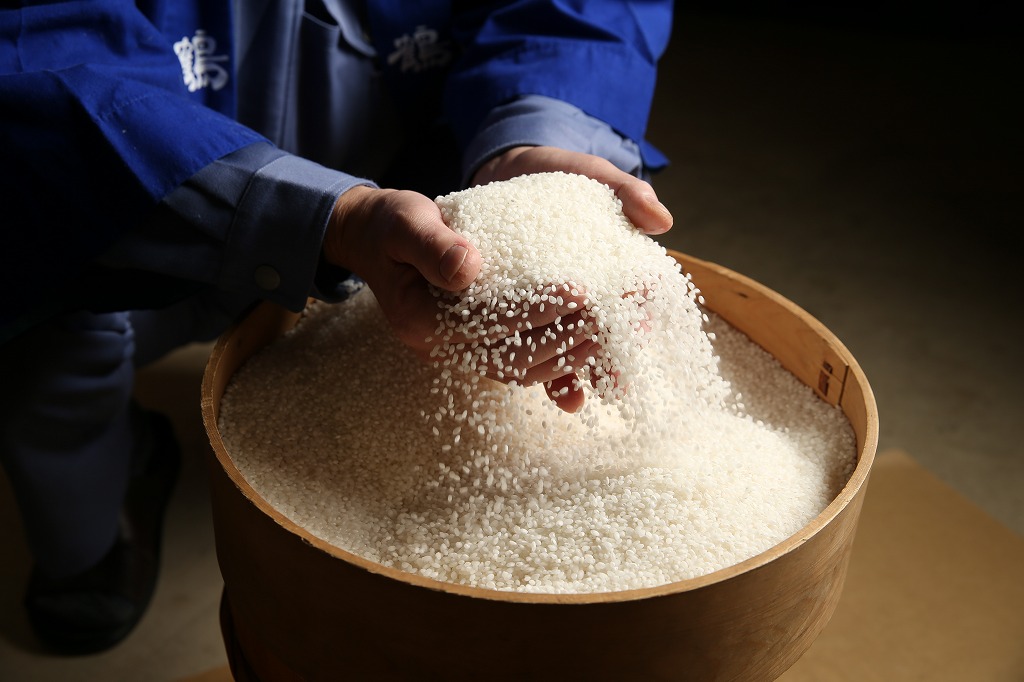 Next the polished rice is washed. The water used for the entire sake making processes must be potable and should contain many microorganisms and minerals.
We use water sourced underground, drawn from a 50 meter deep well near the Yada river.
Keeping this water at 15 degrees Celsius at all times is critical to making our Kasumitsuru sake so great. We are indeed fortunate to live in Tajima.
Polishing reduces the rice’s moisture content to approximately 10%, so the rice must be stored for about one month to regain a 15% moisture content.
This timing is determined by the Toji or the chief brewer and their broad experience and skill.
This moisture content adjustment impacts the next process of steaming rice or Mushimai.
Because rice harvests are different each year, the moisture content adjustments also vary.
The Toji is responsible for managing these variances.

The moisture-content-adjusted sakamai or rice used for making sake is steamed at 100 degrees Celsius.

Making koji (malt): The three important preparation steps are malting, Moto and preparation.
Malt microbes are sprinkled onto the steamed rice.
Rice starch changes to glucose by the enzymatic saccharification of the malt microbes.
Malt production continues for 48 hours with hands, maintaining ideal temperature and moisture content throughout, and making sure microbes will not be over-produced.
Making the koji for Daiginjo (see note below) is especially hard work.
For the Toji, this is an exhausting week without sleep and the highlight of this highly skilled profession.

Note: Daiginjo represents the highest quality in sake making.
To classify as Daiginjo, a minimum of 50% of the outer rice layers must be polished away and less than 10% by weight of alcohol can be added.
Also the ginjo making process or Moromi, takes 25 days or longer at low temperature to qualify as Daiginjo. 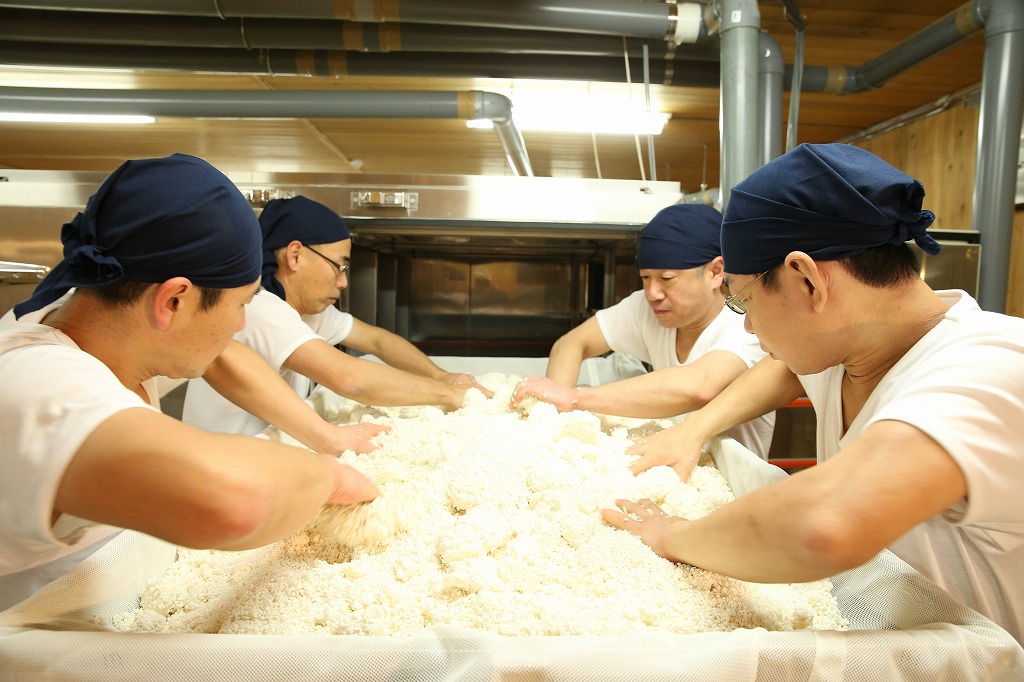 The primary ingredients of Shubo (see below), namely malt, steamed rice and water, are put into a wooden tank.
The Toji is stirring and crushing the steamed rice carefully by wooden paddles. This process is called Yamaoroshi.
This process is very time consuming and requires a high degree of skill.
Our company has been conducting this traditional process for long time.
We are proud to affirm that our product Kasumitsuru is made at one of the very few sake breweries that continue to use Kimoto method.

Note: Shubo is made by Mushimai or steamed rice with malt added.
It is the base of Moromi for Japanese sake, also known as Moto. 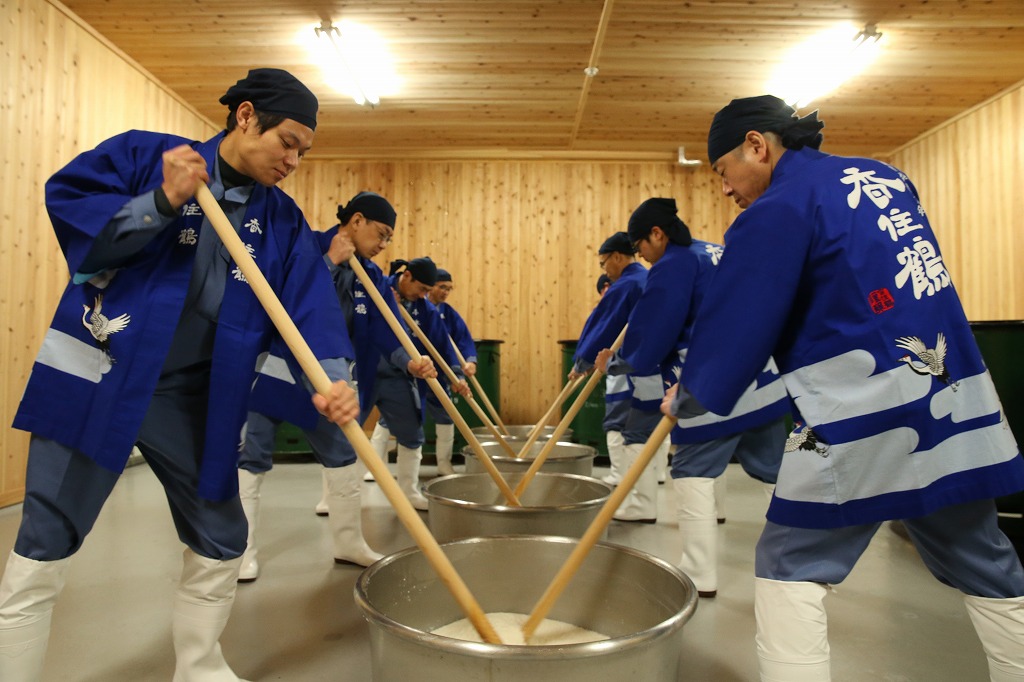 Shubo, water, malt and steamed rice are put together in three steps.
The temperature and amounts of each ingredients are adjusted throughout.
During these steps, saccharification and alcohol fermentation proceed and the temperature is kept at 15 degrees Celsius by the sixth day.
Meanwhile, the Moromi (see note below) is analyzed frequently to monitor the progress of the sake making processes.
About 20 days after shikomi or preparation, the sake and sake lees are separated by squeezing the unrefined sake through a large machine.
Genshu or unrefined sake is stored in a cool cellar and allowed to mature.
Taste testing determines when products are ready to be delivered.

Note: The staged combination of steamed rice, koji malt, water and Shubo is called Moromi.
When fermentation is complete, a brand new batch of sake is ready.

These are the basic steps in making sake.
Each stage in the process relies on the Toji’s skills and experience to produce an outstanding product. 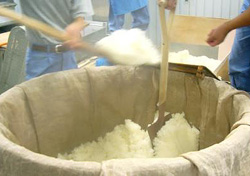 The birthplace of Kasumitsuru Co, Ltd, was Mori, Kasumi-ku, Kami-cho, Mikata-gun, Hyogo, near the company’s current location. Mori is also the home of Kameizan Daijyoji temple, where a collection of 165 paintings on fusuma sliding doors is maintained. All of these nihon-ga (Japanese-style paintings) were painted by the famous Ohkyo Maruyama (1733-1795) and his pupils in the late Edo period and have been designated as national important cultural properties of Japan. Thus, the temple is also called Ohkyo temple. It is said that Ohkyo and his pupils, who were far from their homes in Kyoto, received great comfort from drinking Kasumitsuru sake.

It has been 295 years since Kasumitsuru was founded in 1725 (Kyoho 10).  In December 1945 (Showa 20), Kasumitsuru merged with three other breweries in the area. Mr. Seizo Fukumoto from Fukumoto Shuzojo, the largest of these breweries, became the president. Kasumitsuru had struggled due to the increased number of “major brand” conscious customers in the postwar period, however, since the 2000s (the Showa 50s) Kasumitsuru has increased its sales as a result of continuing and enhancing its policy of quality first. Kasumitsuru has firmly established its place as a local sake in Tajima area and has been highly acclaimed as a local sake in Hyogo. To accommodate the further expanding its business, Kasumitsuru moved to Kobara, Kasumi-ku, its current location in October 2003 (Heisei 15), and since has aimed at developing high-value-added products to further enhance its business.

Presently, fifty-nine percent of the total shipments are for the local Tajima area (3 cities and 2 towns, with a total population of 160,000), and remaining shipments are for the Keihanshin area, Tottori, Tango and Tokyo.  Kasumitsuru has also enhanced its sales channels to overseas markets, such as the U.S., China and the U.K.

Contributing to the promotion and development of Hyogo, including the Tajima area, allows Kasumitsuru to further strengthen the foundation of the company, the offering of a local sake which is loved by and is essential for the customers in the Tajima area.